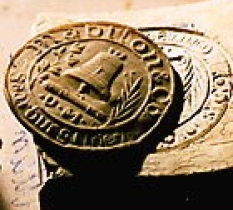 Peace shall be its foremost peal

“What within the dam's deep pit was built by hand with fire's help, in the towers bell floor high loudly will proclaim of us.” (Schiller) 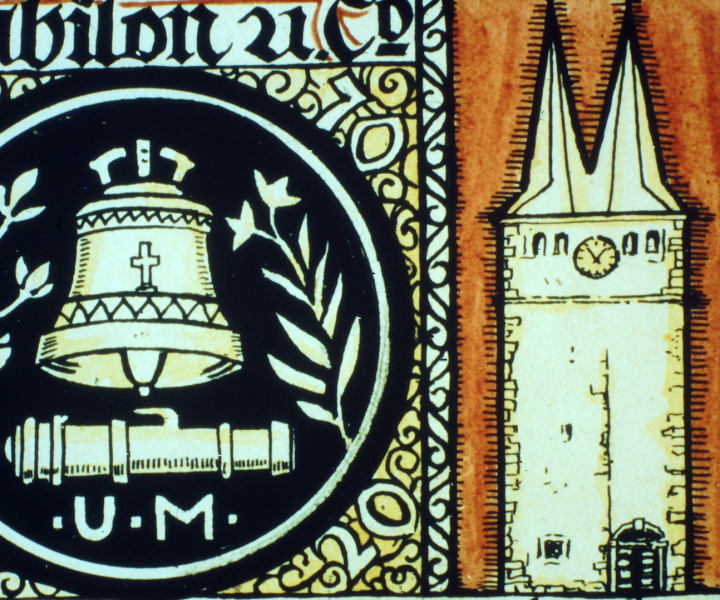 A visit to the ancient Mabilon Bell Foundry

From 1770 on, one of the oldest arts and crafts of Christian culture was practiced in Saarburg: bellcasting.

Although the last bell was cast in 2003, the workshop looks as if the master and his helpers are just taking a short break. And that’s the way it’s going to stay. Germany’s only bell foundry museum is situated on the edge of Saarburg’s thousand year old historical centre.  The oldest existing Mabilon bell, was cast in 1639 and is now in Calle near Meschede (Germany). Because of the foundry's perfect state of preservation it is a unique historical witness to its era.

When the church and chapel bells ring in the towns and in the countryside few are aware of how much skill and craftsmanship, care and effort, are involved in casting a bell. Only a very few people still master this craft today. With their centuries-old tradition the bell foundry families have jealously guarded their secrets, handing them down from generation to generation. The art of the bell-maker, practised by only a few today, is rightly appreciated as one of the most exceptional and most time honoured profession and one which the famous German poet Friedrich Schiller paid homage with his world famous poem “The Song of the Bell”. 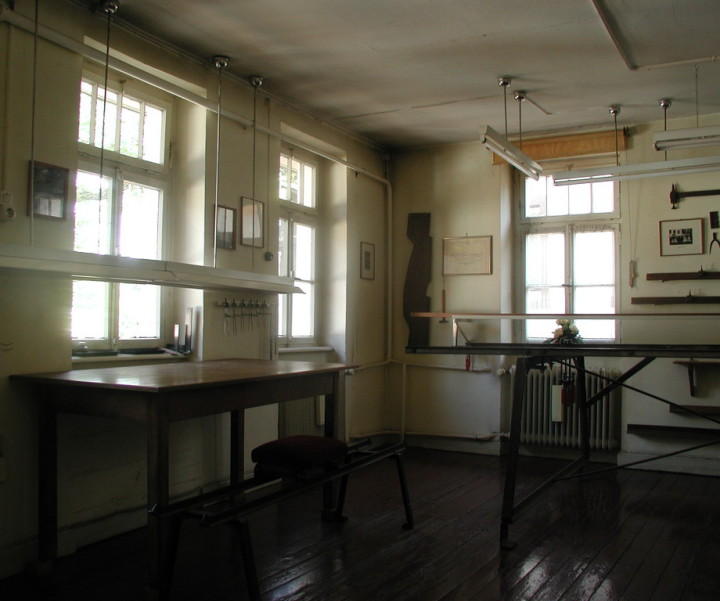 The fine art of bell-making lies in the achievement of a harmonic balance between the desired main overtones and the hum, which is the deepest and the most persistent tone of the bell. To achieve the required tones the metallic composition of the cast is less important than the “profile” of the bell, i.e. the correct proportion of height, circumference, thickness and shape and the various curves.

Amazingly, the choice of these proportions is based much more on time proven experience than on scientific calculations. Wooden templates with this profile are used to form the mould. The preparation of the profile is the key to a successful bell, and thus, understandably, its design is the personal responsibility of the master bell-maker. 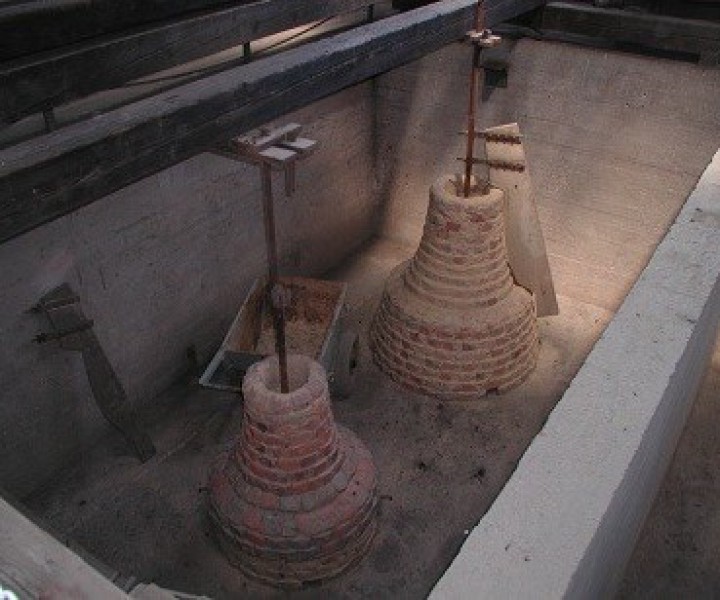 Preparation of the Mould

To start with, the core or inside of a bell is prepared with semi-circular bricks, which are coated with clay.  The core is formed with the help of wooden “ribs” in the shape of the bell’s profile. Once finished, the core mirrors the interior of the bell. Then it is dried by a fire, which is lit underneath its hollow inside. Then the shapers or moulders, who normally are highly trained experts, apply the second layer of clay from which they form, with the aid of the template, a complete model bell which is also known as the “false” bell. This is followed by another thick layer of clay which forms the cope or outer mould. After all three parts are completely dry a pulley is used to hoist up the cope.

The false bell is now carefully broken up and the pieces removed. This is relatively easy to do as a coating of graphite or wax had been applied between the individual layers of clay.

Finally, the exterior cope is placed over the core again. In the place where the false bell used to be there is now a cavity into which the molten metal can be poured.

Naturally, the whole process is much more arduous and time consuming than would appear from this relatively simple and easy to understand explanation: for instance, the clay must be prepared with a special technique, and each clay layer needs to be built up using thin individual layers each of which has to dry before the next layer can be applied. The cohesiveness of the various layers of clay is increased by inlaying hemp fibres.

For decoration, mirror-images of ornamental inscriptions and pictures made of bees wax are applied to the “false” bell-layer thus leaving their imprint on the inside of the cope. Later they appear clearly visible on the outside of the finished bell.

The finished bell mould consisting of core and cope is then dug firmly into the earth of the casting pit in order to prevent the inflowing metal from breaking the mould. By the time the form is firmly covered and embedded in the earth the bell-metal composed of 78 parts of copper and 22 parts of tin, is already melting in the furnace. 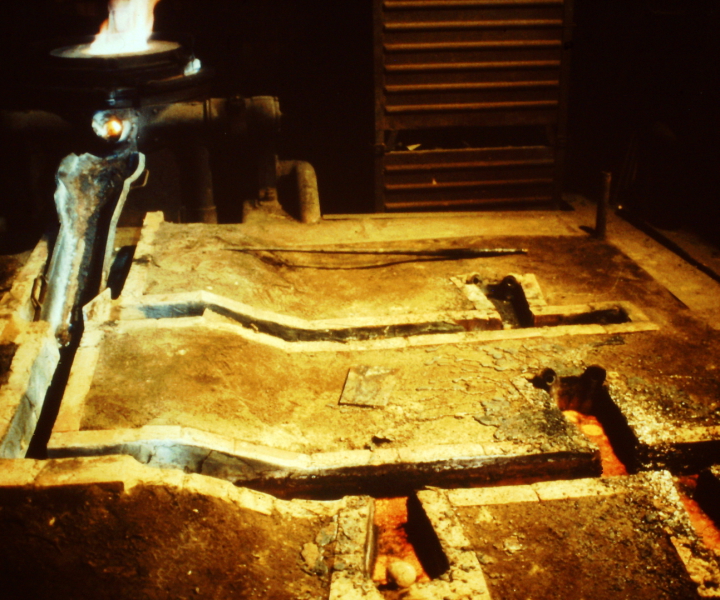 The casting itself is a dignified and moving event. The clergyman who ordered the bell and members of his parish gather around the casting pit. During the bell casting, just above the fireplace in a niche, a candle burns next to the statue of St. Joseph - an unbroken tradition since time immemorial. A dignified silence reigns; instructions are given in low voices, already now reflecting the atmosphere in which the bell will soon perform its duty.

Meanwhile, the craftsmen have taken up their positions at the casting pit. Clay made gutters and canals lead from the furnace to the individual vents of the bell mould. Everything is prepared for casting. In the dim light of the workshop the priest and the master bell-maker say a short prayer, asking God to bless man’s work and make the cast a success.

Then with the words “in God’s name” the master bell-maker knocks the plug out and the freed white hot glowing mass finds its way bubbling and sizzling to the bell mould under the earth. In a muted voice the master gives the few necessary instructions to his helpers. Hissing, the hot air escapes in a blue green flame through the “windpipes” of the mould. Within a few minutes the cast is completed. A gurgling sound indicates that the cavity left by the “false bell” is now filled with the molten metal. A grateful prayer and a moment of silence complete the casting, a truly unique experience. 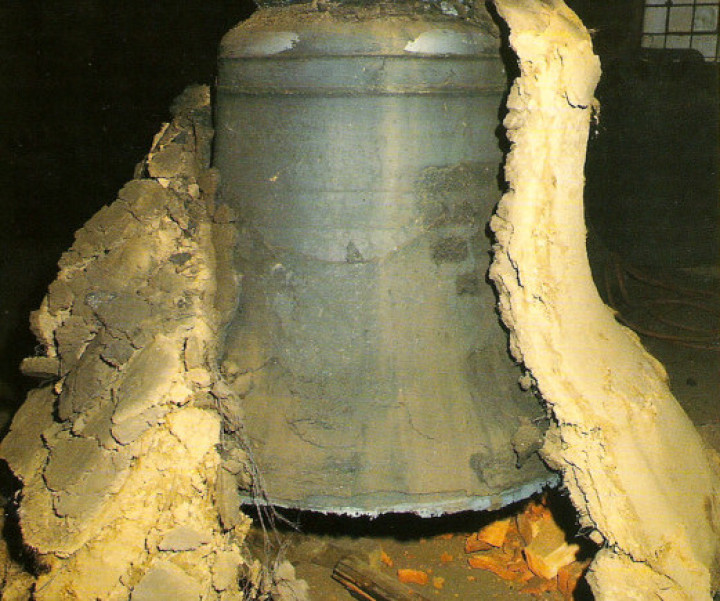 The birth of the bell

It takes a few days for the mould to cool enough for the bell to be removed from the pit. When it first appears it is still black and unsightly, but with the help of some sand and water it soon gains a beautiful silver grey gloss. Now, only the clapper needs to be attached and the bell is ready for installation, but not before the bell expert concludes his expertise on the accuracy and pureness of the desired tones ensuring that the bell is a real tribute to the master, his helpers, and their skills. 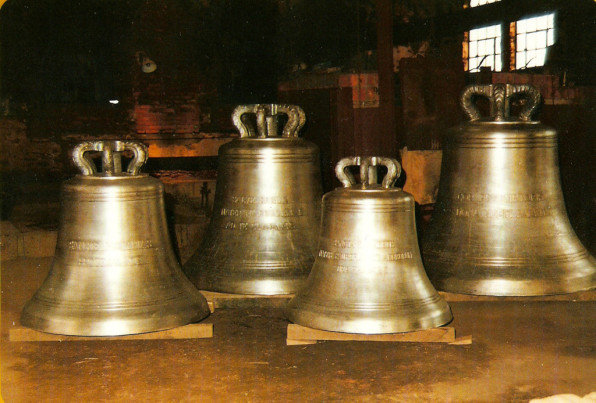